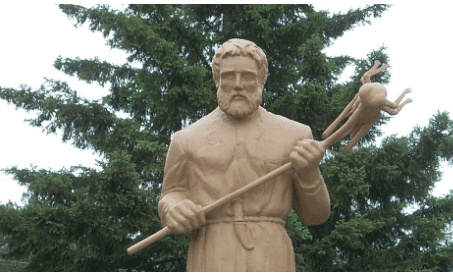 Next month is every Irishmen’s favorite holiday, a day where we celebrate a man that supposedly forced all of the snakes out of Ireland— but wait a minute, we live in Minnesota where 1.5 million of us have Scandinavian lineage and only 500,000 have Irish Ancestors. Shouldn’t there be a more relevant saint for our neck of the woods? Well you’re in luck my friend, indeed there is and his name is St. Urho. Now comes the question of which saint is better?

There has been some fierce debate about which is better over there years, especially up on the North Shore and in the Northern woods in Minnesota, and before these special dates happen, we’d like to take a moment to set the record strait once and for all. Whether you’ve picked a side, or are wonder what in the world we’re talking about, we think you’ll enjoy this discussion.

About the Holidays & Saints

St. Patrick is arguably the most well know Saint of these two, and one could claim a much longer presence in American holidays. We celebrate St. Patrick’s Day every March 17th in honor of the day that the patron saint of Ireland (Named Patrick) died. Originally the celebration day was geared to commemorate the time when Christianity was brought to Ireland, and was a festival day celebrated by many Christian groups, not just the Catholic Church. The day traditionally included a large feast, church services, the wearing of green, and removed the Catholic restrictions during Lent. The removal of Lent restrictions for the day (which often included diet restrictions) led to large feast and use of alcohol, which the holiday has become known for today.

Wearing green on St. Patricks day came about from St. Patrick using Shamrocks (3 leaf clovers) to explain the holy trinity to pagans in Ireland. The tradition was handed down through the years and eventually green became the color of Ireland, solidifying the importance of green during the Irish holiday.

Looking for a place to stay over the holiday? Visit our Packages page to see our special Discounts

St. Urho  while being the lesser-known saint has a story entirely his own that has been celebrated for decades! According to the ancient manuscript “Ode to St. Urho, ” St. Urho is a Finnish priest responsible for forcing all of the frogs out of Finland. St. Urho was able to accomplish this feat by drinking Sour Milk and eating Fish Soup, which aided his voice in becoming so loud that upon hearing it, the frogs of Finland would hop in the other direction. If the story sounds somewhat familiar, it could be because it was written in 1956 by a Finnish-American and fellow Minnesotan named Richard Mattson after being questioned as to why Finland didn’t have saints like St. Patrick.

Over the years the story of St. Urho has been changed and the most common story is that Urho (which means hero in Finish by the way) caused the grasshoppers of Finland to leave by using the incantation, “Grasshopper, grasshopper, go from hence to Hell!” This event saved the Finnish grape harvest from ruin, and all celebrated wearing royal purple (the color of the grapes). Even the date of the celebration has changed, originally schedule for the 24th of May, the holiday moved to the day before St. Patrick’s Day-March 17th. Some say this was done as a silly excuse to feast and celebrate for two days in a row, while other scholars argue that it was done so that the greater saint’s holiday came first.

St. Patrick’s Day is primarily celebrated in Ireland and countries with large populations of Irish descendants (Great Britain, Canada, The United States, etc.). These celebrations usually include music, feasting, consumption of alcohol, wearing of green, and other icons Ireland is famous for like shamrocks, leprechauns, and etc. If you want to party you can be St. Patrick’s Day is a celebration you can experience almost anywhere in the US.

St. Urho’s day is quite similar to the holiday that comes immediately after it, with dressing up in royal purple, music, feasting, alcohol, Finnish traditions and icons, as well as grasshopper themed decorations in honor of the current popular version of Urho’s story. St Urho’s day is primarily celebrated in the Northern Midwest of the United States and it popular in Minnesota, Canada, and Montana of all places, but there are a few reports of the celebration happening in Finland (the country) as well. Thunder Bay just across the Canadian border of Minnesota also has great St. Urho’s day celebration where a giant grasshopper on a pole is paraded through town in honor of this epic story.

Perhaps closest to home is the yearly celebration that happens in Finland, Minnesota (yes not the country). This year the festival there, which happens to be a short drive from Cove Point Lodge, is going to be celebrated on the 13th, 14th, and 15th in honor of the festivals 40th anniversary. It’s going to be a great event complete with a large list of vendors, memorabilia, and much more. If you decide to head over to Finland, MN and looking for a stay, be sure to check out our special online savings rates!

So which saint is better?

Let’s be honest, the saint that is the winner here is completely subjective. If you’re looking for a national holiday celebration that you could join in on almost anywhere in the USA, St. Patrick is probably your man. Yet, if you’re looking for more local flavor this March, which a story that is much closer to home than St. Patrick could ever dream to be, look no further than St. Urho. St. Urho has become a beloved part of Minnesota lore and the celebrations are just silly enough to give you a fantastic time no matter how you celebrate.