The Legends of Cove Point Lodge 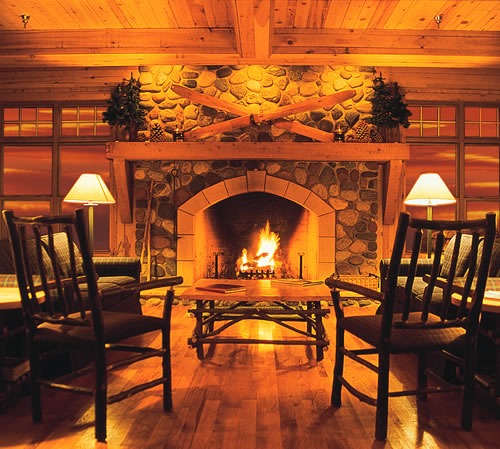 Yesterday
The Ojibway called it Gitchi-Gami.  It means big lake. Local stories have it that the Native Americans were attracted to Cove Point for religious reasons. The point rises gently out of Lake Superior and faces due east, toward the sunrise. Representatives of the many tribes would gather at the point by the tree line about 50 feet up from the water, and build a campfire.  They would gather here to discuss territorial issues, smoke the ceremonial pipe and to celebrate religious customs.

By the mid 1600’s a Frenchman by the name of Radisson arrived on the scene. You could hear the Voyageurs singing and you could see their bright red caps as they paddled up the lake for 15 hours at a time, headed to the trading post at Grand Portage.  Lake Superior transport canoes were 35-40 feet long and carried a crew of up to 12 paddlers with five to six thousand pounds of fur in each canoe. Sometimes they traveled in groups of up to 40 canoes. When the waves were too dangerous, it was easy to slip into the protection of Cove Point,  land the canoes on the pebble beach and wait out the storms on the big lake.

By the 1860’s, 15 companies were at war over gold rights. No gold was found; but iron ore was discovered. Beaver Bay was settled at this time and it was the first county seat. No roads existed and most people traveled by water. But John Beargrease, a local legendary mail carrier, delivered the mail by dogsled to hamlets along the lake. During this time, timber would be held in the cove until spring. Again, a campfire was built along the shore to keep the men warm as they waited for the ice to leave and for the lake to calm down enough to be able to safely guide the logs down Lake Superior to the lumber mills.  Everyone was always mindful of the power of Lake Superior and in particular the November storm of 1905 when 30 ships went down, many in the area of Split Rock Lighthouse.

Today
Scandinavian immigrants to the United States flocked to the North Shore area because the rocky terrain and cold lake reminded them of home. Until 1994, this land was the home and base of operations for a commercial fisherman who would often go out on the blustery lake alone to tend to his nets, just like his ancestors did back in Norway.

When Cove Point Lodge was built in 1995, it was inspired from the rich and rugged traditions of Scandinavia.  The vibrant color of Cove Point Lodge and adjacent buildings reflects what you will find when visiting the villages of Norway. Our winter campfires at Cove Point are just like those that dot the coastline in Sweden. Mickey’s  Fish House down by the campfire is reminiscent of fishing operations that dot the coastline throughout places like the Sognefjord.  The breakfast that is served in the main lodge is also authentic and even today it is typical healthy fare throughout the fjords, villages and cities of Scandinavia.   Welcome to the Nordic hospitality of Cove Point Lodge.